Gokshura is a very popular health supplement which is actually an extract from the roots and fruits of an annual flowering plant found widespread, across India. It is found in Madhya Pradesh, Deccan Peninsula, Konkan, and in various other parts of the world like Australia, Africa and Southern Asia. Gokshura grows in dry climate areas and even in regions with poor soil conditions and desert type climates where most plants cannot survive.

Gokṣura is known by different other names in India as well as in other parts of the world. Its common Indian names include, Śvadaṃṣṭrā (Sanskrit) and Gokharū (Hindi). In English, Gokṣura is referred to as ‘land-caltrops’, ‘puncture-vine’ or ‘devil’s weed.’

What is the history of Gokshura?

Gokshura belongs to the domain of ancient Indian Ayurveda, possibly the world's oldest system of natural medicine that originated more than an astonishing 5000 years ago. It serves as an excellent alternative for forms of treatment which are known for curing diseases without risky side-effects.

The recurrent mention of Gokshura in ayurvedic literary classics like Chikitsagranthas, Charaka Ashtanga Hridaya, Samhita, Harita Samhita, Sushruta Samhita, Sharangadhara Samhita, and Nighantus have been found. Special attention must be drawn to the reference of Gokshura in the old and historic medical scriptures of Chakradatta. It is also held in high regard across medical fraternities of the world. 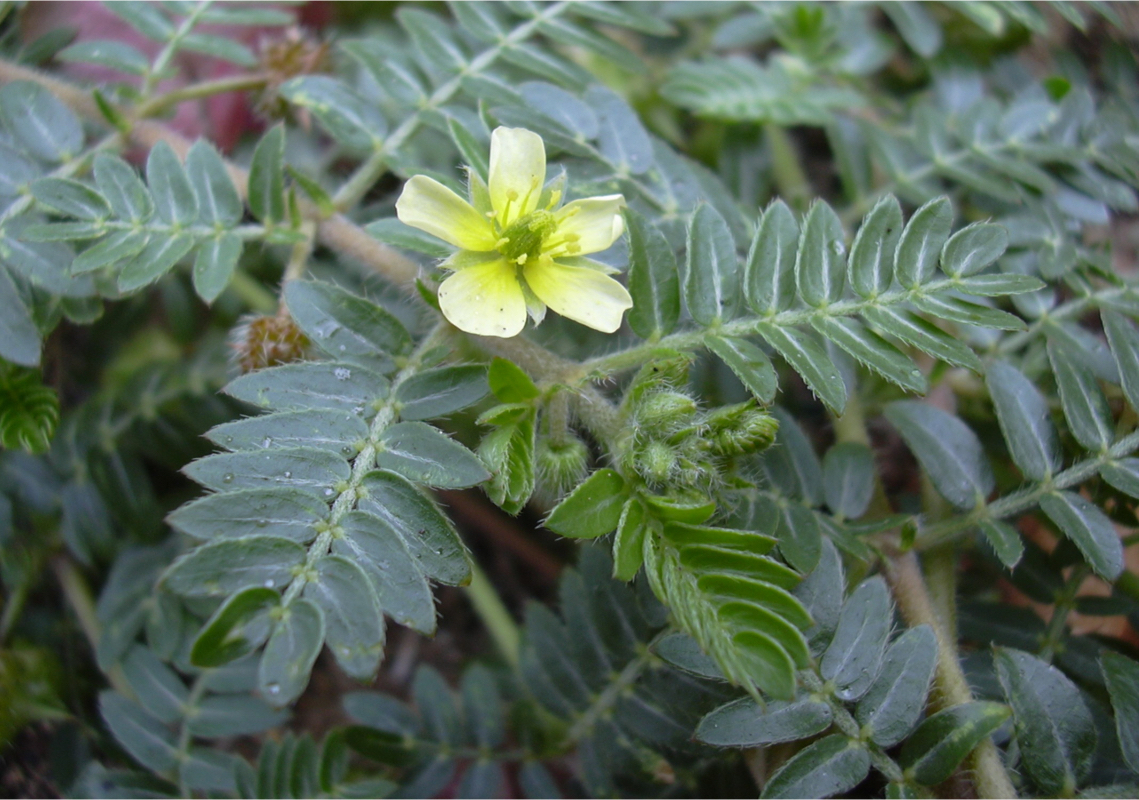 What is Gokshura made of?

Scientists have further studied that furostanol and spirostanol saponins of tigogenin, neo-tigogenin, gitogenin, neogitogenin, hecogenin, neo- hecogenin, diosgenin, chlorogenin, ruscogenin, and sarsasapogenin types are often present in the plant. Moreover, four sulfated saponins of the tigogenin and diosgenin type were also identified during experiments and it was seen that the amount of chief ﬂavonoids is nearly 1.5 times that of main saponins.

What are the main constituents of Gokshura as a product?

What are the ayurvedic characteristics of Gokshura?

The taste of Gokshura on the tongue which is characterized by the ayurvedic concept of Rasa, is ‘Madhura’, meaning sweet. Pharmacological Action, also referred to as Guna, is ‘Guru’ which means heavy and ‘Snigdha’ meaning unctuous. The Virya or action of Gokshura is ‘Shita’ meaning a cool feeling. Lastly, the transformed state after digestion or the Vipaka of Gokshura is also ‘Madhura.’

What are the benefits of Gokshura?

It has been clinically established that the plant can enhance energy and vigour and is also effective in building muscle strength.

Moreover, the powder is also known for augmenting sexual drive and improving fertility in both men and women.

It boosts ovulation in women and sperm production in men. The roots are believed to be potential stomachic appetizers and fruits on the other hand cure coughs, scabies and anaemia.

Concentrated liquor produced from heating or boiling Gokshura leaves, is used for gargling, as a cure for mouth problems, gum pain and the reduction of swellings. In addition, these leaves also promote the menstrual flow and are known to address gonorrhea.

Its extracts have long been used by people for numerous health benefits including keeping diabetes in check and curing obstinate urinary tract infections.

The cooling and nourishing properties of the herb are known to soothe the membranes of the urinary tract helping to normalise the flow of urine.

Gokshura is a purely vegetarian supplement in its essence and is often mixed with other natural herbs like Ashwagandha for best results in treating disorders. Packed with an array of anti-inflammatory and diuretic qualities, Gokshura formulations are exceedingly beneficial in treating a host of diseases.

Interestingly, Gokshura has been historically used in various manners, to cure different ailments in different countries. For example, in China it was traditionally used to cure diseases of the liver, kidney, cardiovascular and immune systems.

In Turkey it was popularly used to combat conditions such as hypertension and hypercholesterolemia.

Iraq on the other hand had the most extensive use of this herbal extract because Iranians used it as tonic and an aphrodisiac.
The Unani school of medicine considers Gokshura highly effective in curing sexual disorders considering it a general stimulant. 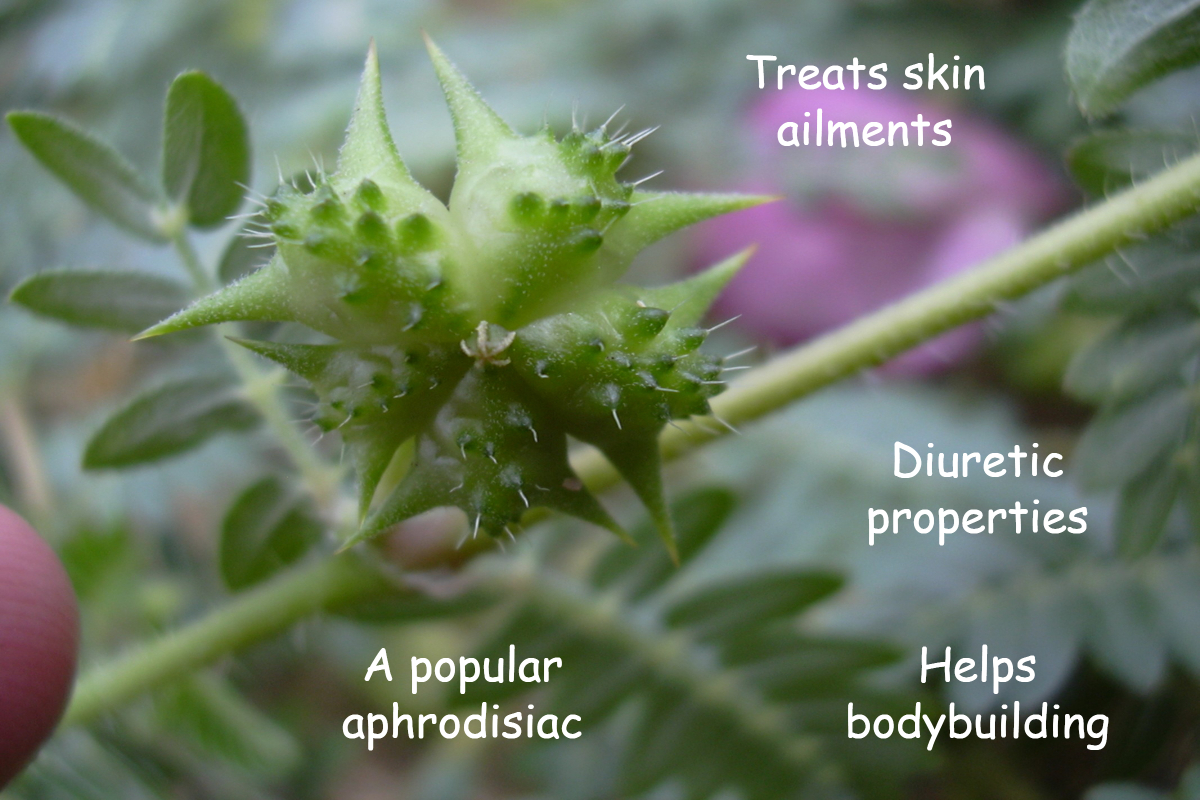 To know more about the benefits of Gokshura, click here

Which disorder treatments is Gokshura now widely used in?

Urinary Tract and Kidney Disorders: Gokshura is extensively prescribed as a cure for urinary tract infections which include pain and a burning sensation while urinating. Gokshura is known to balance body fluids effectively. It helps to address conditions like kidney stones as well.

Sexual Disorders: Intake of Gokshura boosts libido in men and women, addresses impotency, fertility and vitality, and improves sperm quality and quantity in men. This is why Gokshura is widely known as an aphrodisiac.

Heart Problems: Gokshura supplements take care of the heart health and are particularly useful for treating cardiac disorders. Consumption of Gokshura acts as a diuretic and promotes heart activity. The herb also helps in checking blood vessel damage and thwarts the rise of blood cholesterol.

Bodybuilding: It acts as a strong supplement in bodybuilding activities and builds muscle strength. It is also an anti-obesity herb.

Polycystic ovary syndrome or PCOS: PCOS often leads to infertility in women and Gokshura is widely suggested by Ayurveda practitioners for the same as it purgates excess water from the body which in turn reduces the size of the cyst.

Hormonal balance: Gokshura increases levels of the luteinizing hormone (LH) and follicle-stimulating hormone (FSH) which are gonadotropin hormones that stimulate gonads in men and women. This in turn prompts testosterone production in men and estrogen secretion in women. Moreover, Gokshura is an adaptogenic that helps in bringing homeostasis, or equilibrium to the human body.

Which additional conditions is Gokshura popularly employed to treat?

Above and above its benefits, Gokshura is employed to treat additional conditions such as low water retention, eye related issues or problems, menstruation, stress, headaches, obesity, hairfall conditions, rheumatic pain, a weak and crumbling nervous system, bed wetting and piles.

How must one consume Gokshura?

The right dose of Gokshura varies from one individual to another and is dependent on the user’s age, health, and lifestyle choices. Generally the recommended dosage is of 3g – 5g twice a day after meals. 2/3 of the dose should ideally be consumed nearly an hour before workout or training, and the rest to be taken afterwards.

What are the common recommendations of ayurvedic doses for Gokshura?

How long does it take for Gokshura to take effect?

Time taken by herbal medicines is not fixed as it depends on a number of factors related to the user including body type, weight, food habits and lifestyle choices. It greatly depends on the body’s ability to consume the drug. The impact also depends on the dosage and other products and ingredients consumed along with it. The best way to take the medicine is for a period prescribed by an Ayurvedic physician or expert. However, available data and reports suggest that it normally takes one to two weeks time for Gokshura to yield results, though doctors advise to continue the dose for at least sixty days for those seeing early results and ninety days for those taking more time to experience the same.

A dose of 2-3 grams of Gokshura everyday for two months is necessary to get the best results. Also one cannot take the entire amount at one go and must take it multiple times a day. The best possible way to consume Gokshura is to have a dose of six tablets a day in order to consume the required amount of 2-3 grams.

Another interesting fact about this herb is that it gives best results when taken in cycles. Doctors often recommend bodybuilders to use Gokshura at the time of their active and heavy workout period when there is a need to increase muscle mass. Experts also advise avoiding the consumption of the herbal supplement for the rest of the body builder season.